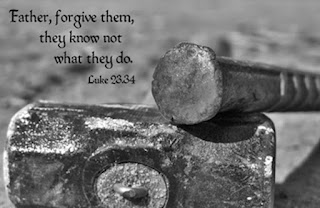 A priest introduced me to a powerful prayer.

And it's powerful, he said, precisely because Jesus prayed it: "Father, forgive them, they know not what they do."

This prayer from the cross is obviously one to use when we are trying to forgive others. But it has other uses, too, the priest explained. He said to use it whenever we might be "hitting a wall" with someone: an obstinate teen, perhaps, or someone who has gone down a wrong path, who is unwilling to reason or change, when we have run out of most options, when we otherwise might be tempted to give up on a person.

"Father, forgive them, they know not what they do."

It's taken me a few months to take that prayer advice to heart. But now I'm seeing it as a powerful prayer for all types of situations, in fact most situations: for peace, for world and church leaders, for respect for the most vulnerable, for those who have left the Church, for sinners dear to us and for those we do not know, for the dying ...

Jesus's prayer, I think, could be prayed for almost anyone or anything.

The priest became an advocate of this prayer after hearing someone else urge its use. Now I pass it along to you, from Jesus's heart, for whatever weighs on your heart this Advent.

"Father, forgive them, they know not what they do."

Inspired by the Year of Faith, Susan Szalewski began writing weekly columns for us. Although that year is over, we liked them so well that we asked her to keep writing. Thankfully, she said yes. So watch for these on Thursdays and see the Year of Faith Blog here.

Posted by Parish of Saint Columbkille at 5:29 PM No comments:

Labels: Father forgive them for they know not what they do, Prayer, St. Columbkille Parish, Susan Szalewski, words of Christ 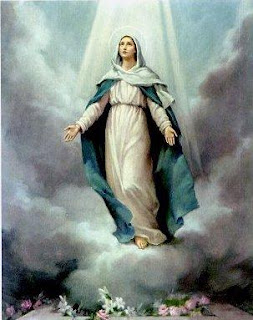 In the Gospel, the angel Gabriel says, "Hail Mary full of Grace." In Greek the word used, κεχαριτωμένη, is a perfect passive participle of χαριτοω meaning "to fill or endow with grace." The tense indicates that Mary was graced from the instant she first existed in her mother's (Anne's) womb (well before Gabriel visited) and ever since. It might be best understood as her being so full of grace that sin can not enter her.

Posted by Parish of Saint Columbkille at 10:18 AM No comments: 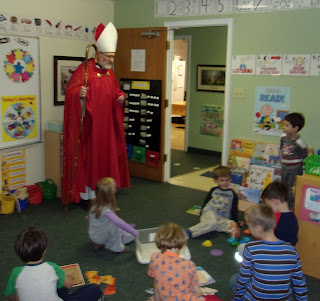 Today, we had a special visitor to Sacred Heart Preschool.  St. Nicholas (Fr. Dave), stopped by to deliver some treats and tell our preschoolers the story of St. Nicholas. It was a fun surprise! 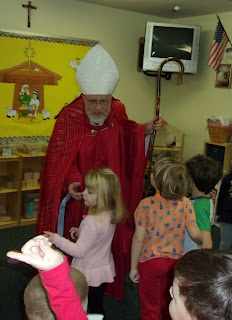 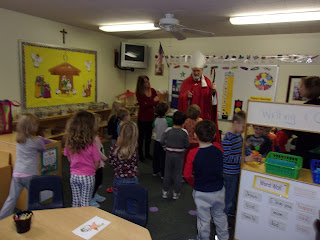 Posted by Parish of Saint Columbkille at 9:25 AM No comments: